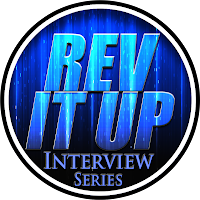 It has been quite a while since I last had an interview with someone but I'm happy to say that the Rev It Up Interview Series has return and This time, I had a pleasure to interview Becky Bennett, who is a gaming journalist who has been working for online sites in the UK and over in the US. She is hardcore gamer when shes playing games such as Call Of Duty, Halo and etc. Even more, She became a Xbox Community Ambassador and she is a huge fan of Tomb Raider's Lara Croft. She is such a big fan of her that she's Cosplay as her at events such as MCM Expo and London Anime Convention!

RIUP - Tell me a bit about yourself

Becky - I always find that question so hard lol but here goes, I'm becky Bennett and I'm from se london uk. I'm a retired model, keen singer and a freelance games journalist/reviewer. I'm also a hardcore gamer and spend half my time on my xbox (probably an understatement way more than half my time lol)

RIUP - How did you get into gaming?

Becky - I always remember my first gaming experience, I was 4 years old when my dad brought home an Atari with the hugely popular classic Space Invaders, from then on I've always been a gamer and always bought the latest consoles and games. Sometimes my dad tells me I spend way to much money and time gaming but I always have the come back of he's to blame for it lol.

RIUP - What kind of games are you generally into?

Becky - If a game is good I will love it, RPGs mmos fps I like them all, I've got a really vast games selection.

RIUP - Is there any game that you play competitively?

Becky - I love online games such as Halo and COD and I am with a clan/gaming community called DHG. I think as a gamer I'm competitive by nature so any game where I am against another team that will always surface.

Becky - I was having some problems with my Xbox one day and saw and the website community ambassador section. I've always been pretty handy up to that point with solving problems to do with my console and games so I applied and got accepted within a week. I've found it a really rewarding experience to help and advise others with anything xbox related.

RIUP - Because you are a Xbox 360 community ambassador, I'm guessing you prefer the Xbox 360 to other consoles?

Becky - It's not so much I prefer it to other consoles as I own many different systems but many of my close friends that I game with online had an xbox so I decided that would be my main console of choice.

RIUP - Did you work for any gaming companies as a Game Journalist/reviewer?

Becky - I am freelance so I've reviewed and written for many online game sites both in the UK and USA which has been great. I'm currently designing and working on my own online games/gadget news and reviews site.

RIUP - There hasn't really been any real news about the new Xbox console. Are you looking forward to it and what kind of stuffs will you be expecting from it?

Becky - To be honest I'm still overwhelmed with how great the xbox 360 is and with all the latest games amazing graphics it still performs perfectly. I would love to hear more of a new console but right now I'm still very content with what they have already given us.

RIUP - You're quite a fan of Lara Croft. Was you able to get the new Tomb Raider game? If so, how good is the game?

Becky - Yes I love her, I grew up playing all the Tomb Raider games so the latest in the series had allot to live up to on my eyes as a veteran fan. It's a really great experience but I did feel it lacked some of the magic the previous games had. I won't say to much as would involve spoilers but it wasn't my favourite of the series.

RIUP - So Have you got a favourite Tomb Raider game?

Becky - It's hard to choose a favourite from the early tomb raider games but the ones I have enjoyed the most are tomb raider 2 and 3 and also tomb raider legend.

RIUP - What is it about Lara Croft that you really love about her?

Becky - Well aside from the obvious that she is incredibly hot lol I love how she's an action girl, she can handle herself in any situation and isn't worried if she breaks a nail. She also portrays a very intelligent female character which I feel some other heroines lack.

Becky - Well going back to one of the previous questions about a new xbox console that would be exciting to hear about. Also any new games such as Dragon Age 4 and Mass Effect would be amazing.

RIUP - Aside from Gaming, You also Cosplayer. When did you start on becoming a cos player and for how long?

Becky - That's only a fairly recent thing actually. I've always loved fancy dress and wasn't really aware of the Cosplay world, but now I know I love it. It's always great going to a gaming event and being complimented on a costume you have taken an age to put together.

RIUP - Are there any events that you will be attending this year?

Becky - Yes, I will be going to MCM London, Eurogamer, and Anime Con. I will be in Cosplay for all of them.

RIUP - Any shout outs that you would like to say?

Becky - Defo, would love to thank @ridentffxi for suggesting me for this interview. Have known him well over a year now and we met via the wonderful world of gaming.